When you hear the names Blanche and Rose, you may think of the famous Golden Girls characters. At the Zoo, Blanche and Rose are celebrities in their own right. The two greater rheas and their zookeepers are getting a lot of attention for successfully getting radiograph images of the birds without having to restrain or anesthetize them.

Rheas will sometimes ingest metallic objects they find in their habitat. It could be a coin or something that flew in by the wind. That was a big motivation to find a way for the rheas to voluntarily get a radiograph image while awake. “Our zoo already provides a long pole that can hold on to the X-ray but we know the rheas wouldn’t be comfortable with a third person pointing a stick at them. So we wanted to make it easy for them and us too,” says Winter Quarters zookeeper Brooke Ferrell. Along with zookeeper Katie Prinsen, the two got to brainstorming. The result was a pegboard wall that can hold the plate, and a bucket of food placed close enough that the birds stop to eat in the perfect spot as the radiograph machine sits on the other side. (see image)

While that may seem like an easy solution, it took nine months of preparing and training for that moment. Ferrell and Prinsen couldn’t just put all the equipment in their habitat one day. They had to ease the rheas into it. “Normally in the wild, they’re very vigilant animals, they’re always on the lookout for predators. So they’re just really wary of everything,” says Prinsen. First, Ferrell and Prinsen put the pegboard wall near their food. Then, they had to get Blanche and Rose used to other equipment so they introduced a cardboard box made to look like the radiograph generator. Once the rheas were ok with that being around, they brought in a big bucket that the generator would rest on, then slowly kept bringing it closer to where their food was. Keepers also used a flashlight to simulate the generator, extension cords and extra people that may be in the room during the radiograph. When the actual equipment was officially in the room, Blanche and Rose were a little hesitant but by the third attempt, they both did it! 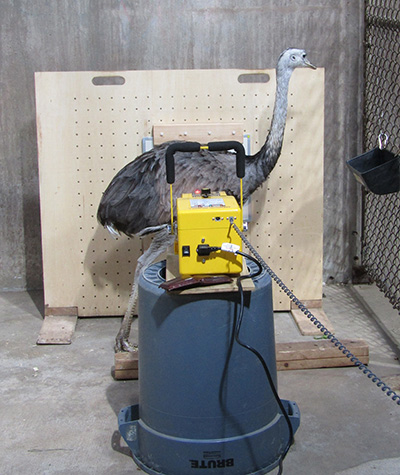 The pegboard allows zookeepers to move the X-ray plate to different positions, allowing for images of different body parts.

To keep this training fresh in their minds and ready for when it really needs to happen, the zookeepers have the rheas train about twice a month. The rheas are also trained to get their vaccinations once a year. Similar to other animals, they are food motivated and will stand by a keeper for the vaccine while getting food. Ferrell and Prinsen are still working on training the rheas for blood draws, which is a little more difficult than vaccination training. “You have to apply pressure to the vein for one minute after the blood is drawn. So they’re standing still for a lot longer,” Prinsen explains. But, if their successful training for the radiographs is any indication, Blanche and Rose will be doing blood draws in no time. Never underestimate the power of time, patience, food and positive reinforcement. 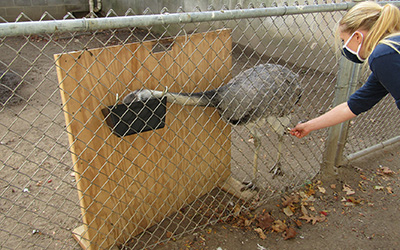 Zookeepers use the holes in a gate to train for vaccines and blood draws.

A rhea is often mistaken for an ostrich. You can find the rheas in the South America habitat along with the tapir and alpaca. The ostriches are in Adventure Africa, across from the elephant habitat. They share a home with zebras, impala and grey-crowned cranes. 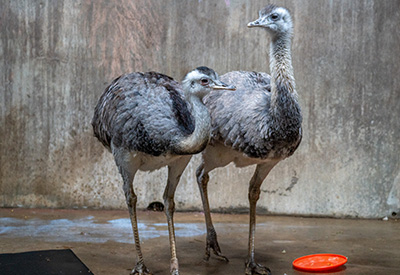 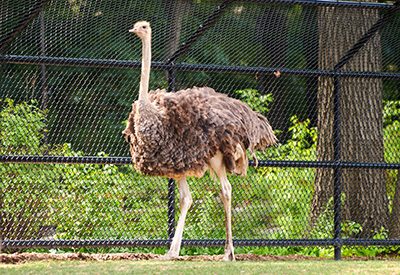